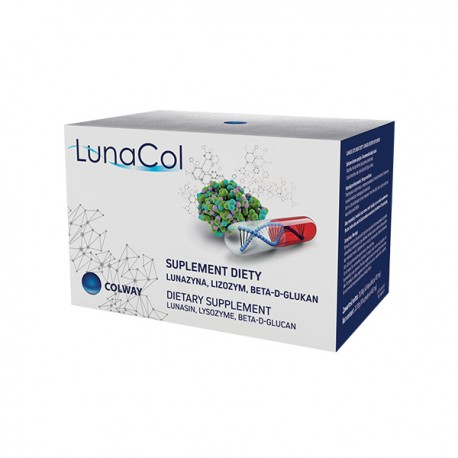 LunaCol is a immune boosting supplement.

Print
Notify me when available

Lunasin. It is a peptide of vegetable origin. It is the first and only known epigenetic food – it means it can influence the increase of gene activity and their qualitative progression. Studies confirm the anticancer properties of lunasin. The preparation contains exclusively lunasin isolated from organic varieties of soya not genetically modified. Lunasin is not responsible for allergic reactions caused by soy products. It also has no effect on the hormonal balance, as it is not associated with phytoestrogens in any way.

Lysozyme (muramidase). It is part of the innate immune system and one of the underlying resistance substances. Its very high concentration, for example, contains breast milk, which protects the newborn child from all germs, before it produces its immune system. Lysozyme is also the most important component of the first food of mammals, the maternal gift of immunity - colostrum. The preparation uses a lysozyme dimer, which safely settles the digestive system, while showing a high efficiency in the activity against antibiotic-resistant bacteria.

Beta - glucans. They are the most important component of dietary fiber. Beta - glucans strengthen the body's first line of defense, the macrophages. They increase the activity of immune cells, increasing their ability to fight intruders. They also affect the rate of blood production in the bone marrow. In addition, they regulate the absorption of glucose, so that after a meal there is no large whale sugar in the blood.

Write a review and get voucher for discount 2 % (Tax Included) , valid 365 days

There are not Product Reviews yet.

Be the first to write your review !