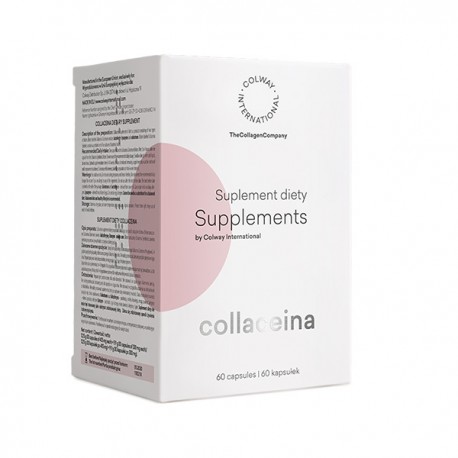 Collaceina is a immune boosting supplement. It contains lactoferrin, lysozyme and colostrum and probiotics bacteria.

Print
Notify me when available

Collaceina consists of two types of capsules. In the first type of capsules there are three natural substances that strengthen the body's immunity. These are:

Lactoferrin is a glycoprotein of the innate immunity of the body. It regulates the adaptive immunity and blocks the chelating capabilities of bacteria, i.e. the ability to capture ferric ions and create complex structures necessary for their existence. It is secreted by the epithelial cells that constitute the first line of our immune defense. Naturally present in the body, it protects its resources of iron, prevents the harmful effect of the most aggressive oxygen and hydroxyl radicals and reduces pathogenic flora in the digestive system. Lactoferrin is the biggest discovery of recent years in relation to supporting our immunity. It stimulates rapid maturation of phagocytes and lymphocyte differentiation. It stimulates components of non-specific immunity, such as macrophages and NK (natural killer) cells, which regulates the humoral and cellular immune response. First of all, lactoferrin stimulates the mechanisms of non-specific immunity. It is present only in the highest forms of life on Earth. So far it has not been discovered in any other species other than mammals.

Lysozyme (also called muramidase) is a highly stable cationic protein. It is the slowest of the known enzymes, but it is also highly potent. It was first described by Alexander Fleming, who considered lysozyme (a basic factor in the innate immunity of all living organisms), not penicillin, as his greatest discovery. Its functions are still being discovered, and the most important of them is a strong bacteriostatic activity, which is particularly high when muramidase is combined with lactoferrin. The synergistic antibacterial effect of these two proteins was identified, among other things, in the milk of breastfeeding mothers and in tears. Lysozyme is present in our digestive tract, which is safe for our body. Now that an increasing number of pathogenic strains become resistant to antibiotics, lysozyme supplementation can be important for improving immunity .

Colostrum (also known as beestings or first milk) is the first gift from the mother to the child. It is a fluid that appears prior to lactation, which equips newly born mammals in immunity. Almost anything could be written about colostrum in the field of nutrition, treatment and biology of mammals - and all this will be true, because colostrum contains more than 250 natural compounds (described so far), which are only beneficial for the body. Hormones, including growth hormones (GH), oxidizing enzymes, polyamides, nucleic acid derivatives, amino acid derivatives and such compounds as lactoperoxidase, lactoferrin, cytokines. Bacteriostatic agents, including immunoglobulins, lactoperoxidase, lactenin, lysozyme and leukocytes. It also contains other antibodies, compounds that stimulate regeneration and delay signs of ageing, such as peptide growth factors: IGF-1, TGF - transforming growth factors and even FGF, capable of activating fibroblasts. Colostrum contains leukocytes, bacteria, proteins that inhibit viral reproduction, pantothenic acid, folic acid. Numerous precursors of substances necessary for the body and easily absorbable vitamins and minerals. It is the most valuable of imaginable foods. Supplementation with colostrum is a return to the sources of life.

The second type of capsules in Collaceina contains a symbiotic set: live bacterial cultures (nine selected strains, whose task is to maintain the balance of bacterial microflora in our digestive tract) and prebiotic food for them - fructooligosaccharides.

Composition per the recommended daily portion:

One capsule of each type daily. Do not take more than the recommended daily dose. The product should be swallowed directly, without chewing, with a cool liquid. Blister packs contain two types of different looking capsules. It is important that a 2-4 hour interval is observed before taking the first and second type of capsule. The optimal duration of supplementation is 4-8 weeks. In cases of weaker immune systems, the supplementation may be used until improvement, and then 4-6 week breaks should be taken to increase the efficiency of the product.

As studies have not been conducted on pregnant women, this dietary supplement should not be used by pregnant or breastfeeding women without first consulting a doctor. Do not use if allergic to any of the ingredients. The dietary supplement cannot be used as a substitute of a diversified diet. Keep out of the reach of small children. The product should not be used after the best before date given on the side of the pack. Store in a dry place at a temperature below 25°C.

Write a review and get voucher for discount 2 % , valid for 186 days

Add product review you will collect 5 points with our loyalty programme. Your can convert 5 points in your account into a voucher for a future purchase. Points will be appear in your account, when administrator has approved your review Reward points apply only to purchased products.

0/5
No reviews for the product

Be the first to write your review !